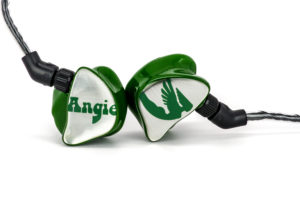 The Angie is a singers dream. Precisely tuned for the live performer who demands crisp vocals without an overpowering low end. Our eight driver configuration outperforms any other vocalist-specific IEM on the market.

Like all JH Audio custom in ear monitors, the Angie offers -26dB of isolation eliminating stage volume and ambient noise – critical for performing musicians and audiophiles alike. This extreme ability to block outside sounds enhances the listening experience and allows lower listening levels reducing the potential for hearing damage.

Each Angie is a unique hand-built creation based on custom ear molds made just for your ears.

The History of “Angie”: Written by Mick Jagger and Keith Richards and recorded in November and December 1972, “Angie” is an acoustic-guitar-driven ballad, which tells of the end of a romance. Richards, who wrote almost all the music and lyrics for the song, claimed in his autobiography that the name Angie was a pseudonym for heroin, and that the song was about his attempt to quit using it while detoxing in Switzerland.

Give us a call and let us treat you to Exceptional Concierge Service 646.385.7426  or email us at info@musicianmonitorsofny.com